We took route 16 (i.e. not the highway) from Gillette through the Black Hills and the national forest. I wanted to hike but 1. it was cold 2. it was kind of raining 3. the one trail that looked appealing went by in a flash and if you are on a mountain (ok, a black hill), you don’t turn around.

Rounding a bend on the way up a mountain (if you have a 6% grade, you are a mountain in my book),  we came to a pull-out that seemed to be attracting a lot of attention. So I pulled over.  Everyone was looking up and taking photos, but I couldn’t see of what.  I walked over and looked up and there was the profile of George Washington sticking out of the side of a cliff.  I think we found Mt. Rushmore.

What a bonus. I knew Mt. Rushmore would be a drive-by because they don’t allow dogs, so I had expected to get only a glimpse.  Very exciting. I also got the drive by:

Perhaps because I did not actually stop at Mt. Rushmore, Google Maps decided I was an unpatriotic SOB and needed to be taught a lesson.  As I continued on 16 headed for a the turn off before Rapid City, Google started giving me whacky directions: “Keep left” (huh? it says Rapid City to the right)–pulled over and looked at the phone; google wanted me to keep left and then do a U-Turn; “turn right” (well, right is a dirt road going no where, so no thank you). “Keep left” for I forget the name of the town; again I pulled over and again it wanted me to drive to random town and do a U-turn. It’s one thing to have to repeatedly pull over to consult a map.  But Google is the map.  Fortunately, there don’t seem to be all that many roads in my part of SD. So how lost could I get? That’s when Google decided to up the penalty:  it crapped out entirely just short of Rapid City. Pulled over. Google couldn’t find anywhere. At all. Red circle spinning.  I had plenty of cellular. Try again. Still no dice.  So I wound up lost in construction in Rapid City (with, of course, a whining dog in the back seat).

Eventually I found 90 East and drove to Wall, SD, home of the famous Wall Drug Store. I thought it would be something historical, until I saw billboard after billboard and knew I was in for A Roadside Attraction.  The photo of the facade didn’t turn out (there is a one Wikipedia), but Calli posed at a few attractions, like the stuffed bison:

And one of the Old West statues:

It’s an indoor mall/gift shop that goes on forever, all fixed up to look ol’timey. The complex takes up most of one side of the street. The other side is just as ol’timey and full of other shops and cafes.  I bought another jigger.  Just because. I looked in the leather store and got momentarily motivated; I could use a belt. But not for $75. I wonder if that shop had been in a different setting–I think that price would seem very reasonable. (Sierra Trading Post needs to start stocking decent belts).

South of Wall is route 240 through the Badlands, where I very happily spent the rest of the day. The weather was absolutely perfect.  The Badlands are a mesmerizing combination of praire and 75 million years of rock formations.  Calli could not go on the trails, but I did take her on the overlooks and on one fascinating boardwalk ramble through a fossil exhibit. Seven bronze replicas of fossils were attached to different displays along the route, with indicators whether the animal adapted (e.g. horse, dog), moved (e.g. alligator) or died (mammoth octopus/squid/snail fish called ammonites, e.g.).  Everywhere I found these signs:

And yet, there seemed to be precious little concern among my fellow eco-tourists. Toddlers ran off the paths toward the hills with all the reptile-savvy of, well, a toddler, and parents seemed OK.  Letting baby play patty-cake with the dirt at Yellowstone seemed to me the height of my kind of parenting.  Letting him run by the rattlesnake sign into the grass?  I shuddered and held the leash tighter.  I’m guessing the snakes don’t hang around the heavily touristed parts, but still.

As usual, photography is futile. As usual, that didn’t stop me.  A random selection of gorgeousness: 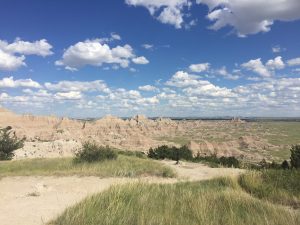 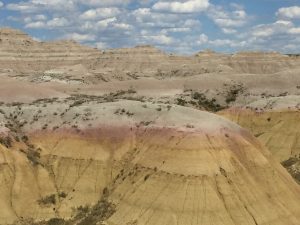 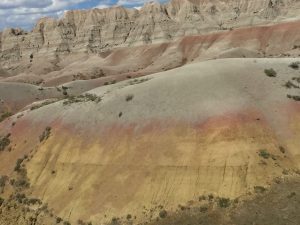 Around 5, I headed toward Scenic Drive 44, just outside the south-east entrance to the park.  Five miles down the road is the Circle View Ranch on the top of a hill overlooking the most beautiful countryside.

I’ve been looking forward to this stay for months. Circle View has chickens, a peacock, at least one horse, and cattle. They also have a 1 year old dog named Boomer, who killed the other peacock.  Boomer introduced Calli to the chickens:

That was all fine until Calli thought she might like a bit of chicken for dessert, and I put the shock collar on her.  For an appetizer, she ate innumerable cow patties. She and Boomer thought they were quite the delicacy. Really disgusting.

Most of the cattle are off in pasture, but there is a bottle-fed calf named Bill.  Calli was appalled when Bill strolled over to introduce himself:

Bill was a twin and the mother picked the girl. (I guess they choose only one).   So Bill lives at near the chickens and has his run of the place. Calli did not know what to make of Bill, but I got to feed him!!!

I am staying in the separate guest house (where they allow dogs).  It has four bedrooms, one of which (mine) has its own bath.

The view from the back deck is amazing:

We (Calli, Boomer, Bill the cow, the bikers from South Arizona, and me) sat on the deck and watched this view for a long time.  I offered around the bourbon, but they had brought beers. Finally, made some ramen, spent a couple of hours writing, took this picture,

and waited for the dark so I could see the stars.  Remember all those beautiful clouds in the photos above?  They obscured most of the stars.  So, bed.

4 thoughts on “The Badlands and Bill, the Cow”