The sun rises early in South  Dakota. It was light between 4 and 4:30, sun up around 5.  Calli and I took a walk and met Bill, who was busy having breakfast. Boomer ran up and the two dogs were immediately absorbed in some canine game.  Poor Bill raised his head from the grass and started ambling over. He clearly wanted to play.  I have a video, but it won’t upload. It was adorable. Want to turn instant vegetarian? Hang out with a calf who thinks he is a dog.

At 7:30 we all gathered at the main lodge for a farm breakfast.  Downstairs in the lodge is a large living/dining/kitchen area. The dining areas has 2 large table, so every sits family style.  Breakfast was great: fresh eggs, homemade biscuits with homemade blackberry butter (and that gross grey gravy–maybe it’s yummy, but it looks awful), sausage, yogurt, fruit, fruit smoothies, juice….oh and potato patties, but I’m not a fan, so, as with the gravy, I skipped it.  And coffee.  It was good.  I sat with the family who pulled in last evening and were in the separate guest house wtih me. They are from Athens GA and he is a professor as well. Very very nice people with a delightful 14-year old son, smart and personable.

After breakfast the son fed Bill, who head-butted the poor kid in the crotch when he pulled away the empty bottle.  They fed the chickens to the rapt attention of all of us non-farm types.  Then I took Calli on a long walk down the hill to the river (about 2 miles RT).

The river is down a steep bank, and the last little bit was a track through tall grass. I don’t need a ‘beware of rattle snakes’ sign to keep me hyper vigilant.

Around 10 (I really didn’t want to leave) I pulled out onto Scenic Drive 44 and pretty much followed it (the name changed to 18 and then 46) for almost 6 hours.  One stop for gas and bathroom. Did I want to stop more to walk? Yes. Was there anywhere to stop? Nope. Could have popped in to any one of a LOT of small casinos (they look like bars or convenience stores).  Prairie. Cows. Horses. Farmland. Cows. Horses. Repeat.  I really enjoyed it, but at the same time it was humbling. This is not an easy life, raising livestock and/or farming.  The land is visually lush, but looks like a ton of hard and uncertain work. I know a lot of our food comes from BIG farms and I know I know NOTHING about farming.  But I was pretty full of awe and gratitude for the people whose lives are devoted to those cows, horses, fields.  My life is pretty antiseptic and super easy by comparison.

We finally arrived in Beresford South Dakota, home of Kate’s Cottage, my home for the night.  The farm sits on a quarter plot (the land is centuriated–as the Romans would say–into square mile blocks, and then quartered into 160 acre farms). There are three houses (the new house, the original farm house, and the really original Kate’s Cottage) and several barns/outbuildings.  Gale, who owns the farm and cottage, was just lovely. 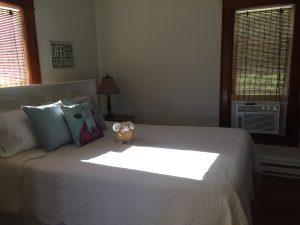 I could have just moved in. But South Dakota is a lot of farms. And poor wi-fi (which is why this is day late).

We drove on secondary roads in search of a good chocolate store. Gale told me that if I took the same road I had come on I would come to the Spirit lake region and there should be cute shops, including a chocolate shop. And there probably were, except Google maps again was messing with me and I got lost.  I wound up at Okoboji Lake.   Literally.   On the residential drive around the lake. Stopped a local resident on her constitutional. She gave me directions. She was clearly in the employ of google maps.  Found gas.  Found a route north, sort of.

The intermediate goal was Hayfield Minnesota, home of my good friend Kristi, to see her wonderful parents.  I wanted to bring chocolate. I’m lost, on what is clearly not the road I want, and lo! A chocolate shop.  Bought a lovely box of chocolates. Got bad directions from the equally lovely proprietors.  Google took pity. Told me to turn west. Sighing, I did. It got me eventually north and east and to Hayfield.

I’ve wanted to see Hayfield for the 20 years I’ve known Kristi. I was not disappointed, even though Google thought I should go to Blooming Prairie first, turn around, and go back to the main road.  I did. AND THEN: Google started talking through the car speakers with a creepy, unintelligible moaning. Calli was in the front seat almost at the sound. Whatever.  I had a wonderful couple of hours with her folks and got to Rochester in one piece.