Proof that this is starting to wear on me: I’m sitting on the bed watching HGTV, about as mindless as one can get.  There is  a show, no kidding, about house hunting for people who have won the lottery.  This is the first time I’ve turned on a TV the whole trip. That’s how tired I am.

My room at the Cody Hotel had a personal porch (overlooking the parking lot, but beyond that, the wonderful hills).  Calli sat on the bench and kept watch while I packed the car.

We didn’t leave Cody until about 10 (Calli got some more equipment at STP, because, well, why not?). The way out of town took us dangerously close to the dog park, and the back seat driver noticed.

The drive was, as usual, strikingly different from yesterday. Almost every day has provided a different scene out the windscreen, but one thing has remained the same: it’s impossible to capture what I am seeing. Even if I pull over, what I can see just doesn’t digitally translate. It’s frustrating. I want to bring it all home with me. I drove through hills, rocks, desert, mountain, forests. Although I was on a secondary road (14), there was no place to pull over; photos, therefore, are sporadic.This is route 14, completely flat with the mountains in the way distance.  Yes, it looks big, but it’s so big it’s hard to really absorb.

Closer to the hills the roadside got more green: 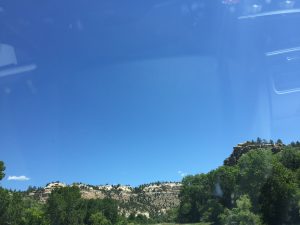 But up close, they just can’t be absorbed:

I pulled over on the top of the pass. There were several hikers getting ready to climb these peaks!  Calli was all over them, wanting either to escape the car or climb the cliffs:

With my back to the cliffs, here is Tensleep Canyon

Tensleep Canyon is so gorgeous that I couldn’t choose which photo to post, so….

Can’t have a canyon without a river:

I had put Meadow lark Lake in the GPS but google took me up a private dirt road so I gave up. Then I passed it five miles later on the other side of the road. Go figure.  This is from the highway but very pretty:

At Buffalo I got on 90 East, which is a non-highway highway. With few exits and ZERO facilities. Just desert and hills and buttes and scrub. Fortunately there was a decent gas station in Buffalo.

Gillette is not exciting: coal town with lots of big box stores.  But it also has a great dog park. I met the woman who spearheaded the whole park. It’s named after her dog Oso, who was killed in the area. They raised over 20,000 dollars.  Sounds like it was a bit of a headache but worth it.  Calli wasn’t too crazy about the dogs there, but she was out in the air, which is something. I met a guy with a bloodhound who uses her to hunt mountain lions.  He was not pleasant. Neither was the bloodhound.

Tomorrow I will regain my energy! Mt. Rushmore will have to be viewed from the car (not at all dog friendly, although I read a blog by a woman who just ignored that because her dog is special. My dog is just a dog. She plays by the rules, mostly). Badlands also not dog friendly.  I’ll be handing a lot of treats to the back seat.  Too bad I can’t just give her my ipad and tell her to watch a movie.