Hi Full disclosure: it wasn’t only that I was too tired to write yesterday.  Somehow I couldn’t.  I had been alone for a week, enjoying casual conversations with people whom I had never before met and would likely never meet again.  I had figured out a pattern to traveling: go early while energy levels are high, explore in the afternoon, read and write at night.  That might sound very solitary and even boring, but it suits me, a fact of which I’m not particularly proud.  It’s not an accident that quirky types wind up in quirky fields, and Classical Philology is definitely quirky, at the very least.  Finding myself in the company of my son, Jon, and his lovely partner, Celina, I was out of my element of aloneness and suddenly in a different world, full of familiar connections.  The silence of the last week made the shift more pronounced and weirdly unsettling–it felt a bit like landing in a different country.

I didn’t have anything to write, even though I had lots I could write: the remarkable, ever-changing vistas through the hills and then the desert in Arizona and California:

the long drive interrupted by adobe-looking portals with a huge inscription CALIFORNIA through which one must pass, and at which one must stop and pass visual inspection by uniformed young men before getting waved into California (I was passed through with a smile, but it made me wonder what the other possibilities were–and triggered by what); the sprawling squalor of East LA and increasingly insane traffic going toward the middle of the city; getting off to find a bathroom for the both of us,with only Calli having any success (the gas station’s restrooms were clearly limited to the dirt around the perimeter, and, judging by the smell, they were heavily patronized).

Celina had a small dinner party in honor of Jon’s graduation and I met some of their (really lovely) friends, ate yummy vegetarian dumplings Jon made and drank an amazing cocktail that Celina dreampt up, and finally fell deeply and gratefully asleep.

shiny new buildings next to pretty decrepit hold-overs from another time;

Both the Mendicino Farms (where we ate lunch) and the Formosa Cafe (famous for its famous clientele) are on Santa Monica Blvd, which is also old Route 66.

Among the faded glories of the neighborhood is Normadie Towers on Formosa Avenus, a cottages built by Charlie Chaplin in 1923 for his actors and crews (the studio was just down the street). Among its storied tenants were Chaplin himself, Douglas Fairbanks, and Rudolf Valentino: 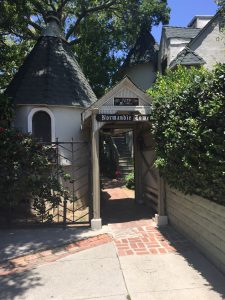 Walking the streets of are lots (too many) of beautiful skinny well-dressed people sharing the sidewalks with Russian Jews escaping anti-Semitism who came as refugees from the 1970s to 90s (those are not necessarily mutually exclusive groups, but you get the point); homeless folk and actresses (both present and very-former). And the faint but so pervasive smell of urine everywhere announces itself.  Fortunately, the weather is so amazing  (as I have told Jon all day) that you can almost forgive the smell.

Calli and I took ourselves to the park, which was full of the above mix of physical beauty both youthful and venerable (those faces of character appeal to me more): gorgeous bodies doing yoga on the lawn and wizened old men chatting at picnic tables.  I met Peanut, a 19-year-old chihauhau

I also met Riley Cyrus (whose instagram account, yorkiewood, is very much worth a look). I got so caught up in talking to Riley’s owner that I forgot to take a photo.  Super nice guy.  Calli chased Riley a bit, ran around kissing random strangers lying on their blankets and reading (good sports all) and got out some Calli-energy.

So what does any of this have to do with John Steinbeck?  In Sedona I started re-reading Travels with Charlie (which I haven’t read since…high school?).  It’s a different time now, in many ways, and I’m a different person, and it’s a different book to me.  Not always in pleasing ways.  A perfect thing to read while I go, however. Today, fortuitously, I read the part of the narrative where Steinbeck meets his wife in Chicago at a good hotel. (Have I mentioned how great it is to just hang out and read?)  And he finds himself unable to write:

“Chicago broke my continuity. This is permissible in life but not in writing. So I leave Chicago out, because it is off the line, out of drawing.  In my travels, it was pleasant and good; in writing, it would contribute only a disunity.”

Well, there you go.  If John Steinbeck, who won both the Pulitzer and the Nobel, can get knocked off kilter by being reintegrated into his life, then my own disorientation seems fated.