I just corrected my post from yesterday. Russians, mostly Jews, came to West Hollywood not during WWII but starting in the 70s to escape the anti-Semitism back home. Plummer Park (near Jon’s apartment) has rule signs in both English and Russian:

The middle of the park has a monument to those who perished in the Holocaust at Babi Yar, near Kiev: 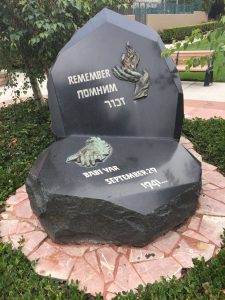 At the cermony for the memorial, Yevgeniva Podolskaya spoke about that horrible day in 1941. Podolskaya survived the slaughter but saw her parents–and thousands more–killed.  “She said the Jews of Kiev were ordered to meet on a street corner and forced to remove their clothing and all their valuables. The naked masses were then marched to the edge of the ravine, where they were shot and thrown to the bottom, she said.” (http://articles.latimes.com/1991-09-30/local/me-2258_1_babi-yar ).  Podolskaya and her two sisters survived.

West Hollywood became for these immigrants “Little Odessa.” Three of the six apartments in Jon and Celina’s section of the building are home to Russians. It used to be four.  The decrease may be part of a trend cited in a recent article in LA Weekly (April 19, 2017), which claims the Russian population is shrinking as new stores, esp. chain stores, squeeze out mom and pop stores, as young people leave for more opportunities, as West Hollywood’s increasing status as the hip place to be makes the neighborhood unaffordable.