I knew Sedona was supposed to be beautiful. But not this beautiful. Prepare for photos. But first we have to get through the Arizona desert.

Some people have bucket lists. I have ‘in my next life’ lists. In my next life I’m going to be all the things I just can’t seem to manage in this one.  A lot of them free me from perfectionism. In my next life, exempli gratia, I am not, I repeat, not, going to need to put every thing in its proper spot when packing, only, comically, to get to the end and find all the little stuff I forgot, forcing me to ruin my perfection packing (because I just don’t have time to do it all again). Next time, funnel direct to suitcase.  Ditto on the setting up the hotel room.  And washing out clothes every night. My suitcase won’t die from dirty laundry. Ergo, despite getting up at 6, I wasn’t on the road until 8:10–partly because a delightfully comic gentleman in front of me at check-out needed, oh how he needed, to reiterate how the handle on the door to their room was defective and kept just swinging back and forth without actually being able to function properly.  He found this vexing in the extreme. I found it hilarious, for all kinds of reasons (including the one I should not have been thinking).  And what is the poor guy behind the desk going to say except he is sorry, he will have it fixed immediately (not adding “why am I hearing about this after the fact when you are checking out?”)  So. 8:10.  I thought I would be in Sedona at 1:30. I neglected to check that I would be crossing my second time zone in two days. So 2:30.  There’s a LOT of desert in Arizona.  It’s really beautiful. I don’t think I’ve been bored yet with the landscape. The narrator of Sicily: Three Thousand Years of Human History, on the other hand, I’m ready to stangle,  although I must admit I now get a lot of stuff about Sicily I didn’t understand.  Audio book: bordering on boring; desert: pretty cool.

Calli disagrees: she wimpered when I put her in the car and fixed me with doleful looks for most of the journey. Sorry, sweetie, but you are a dog.  The roadside “Indian Jewelry” etc looked tempting but I have my piece of kitsch (ceramic solo cup NM Route 66 jigger).  And no designated place in suitcase for “Indian Jewelry”.

I did get off at the rest stop near the Painted Rocks.  The photos don’t do them justice. Beautiful.  I also wanted to take a photo of the marvelous contrast between two RVs in the parking lot but the owners were chatting and it seemed a bit weird to photograph their adjacent mobile homes.  One was tiny (I wish I could remember what it was called) and towed behind their truck (SUV?). The other was one of those really mammoth class A motor homes. Huge. And the two owners were comparing notes. What I would have given for an excuse to walk up to the conversation.  I restrained myself.

This photo is from the first rest area. Not Painted Rocks:

One more from the car (I know, dumb and probably illegal)

Somehow I couldn’t remember what I was in for in Sedona, and assumed it was more desert. After yesterday I knew Calli couldn’t handle desert hikes so I thought, well, I’ll just hang in the hotel room and read/ sleep. Then I saw mountains in the distance and gladdened. And then trees. I was so excited to see trees. But nothing could have prepared me for the drive from 40 down to Sedona. Breathtaking.

My hotel (the Poco Diabolo Resort) is great.  The view from outside the lobby is nuts:

It is not pretentious (beyond the name). Not cheap by La Quinta standards but not crazy. Calli is not free ($20 extra, not bad) AND she got a little welcome doggie bag!  My room faces a lovely little garden.

After settling in (a thing I will not do in my next life), I googled grocery. They have a Whole Foods. I got a turkey sandwich (they called it a ‘custom sandwich’, which enables them to charge $9.00 for it, but I didn’t care. I was so hungry), a kombucha and an extra water, got the dog from the car, and sat on their outside patio. It was lovely.  Then I found the dog park.

Ridiculous, right?  There are THREE separate areas: one basically sand with a shade building for the humans and tables (plus water and buckets, kiddie pool thingy) and two natural areas. A bunch of nice people showed up with their dogs and Calli stopped looking like a martyr and had some fun.

By this time it was almost 6 (7 for those of us who woke up in New Mexico) and we went back to the hotel, but by way of a cool trail back to the car.

I was hot and tired. But it was so nice out…getting cooler, so I fed the dog and loaded her in the car again and drove 2 miles to Little Horse Trail. We didn’t walk the whole thing but it was amazing.

Back at the hotel, I took some more toward sunset photos

And from my little courtyard 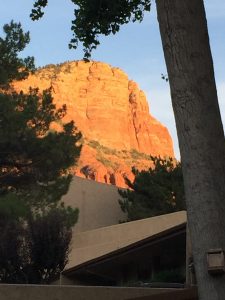 Last one.  The cup on the rim of the fountain holds almost the last of my Nalgene flask of bourbon.

4 thoughts on “Sedona, the unexpected”