Uncle. You win, God. It’s just too many visions of supreme beauty in one day and I couldn’t take any more.  My brain is fried.  I fled Yellowstone, and now I find myself outside of Big Sky Montana at the unbelieveable Rainbow Ranch Lodge (there was soft music already playing when I walked into my room; it has a stone fireplace and a little porch right on the river–is there no pity for the wow weary?)  But I get ahead of myself.

About three lifetimes ago I took Calliope for a walk along the snake river after an incredibly mediocre breakfast.

The view of the hotel from the river:

She made friends with a horse, and didn’t even bark

We went to the falls, again, so you get a picture, again:

The boxer and it’s owner were very nice by the way.   We chatted, of course.

The scenery in Idaho continued to be ridiculously great:

This picture doesn’t adequately show the juxaposition of the yellow green against the deep green, but it was an image I hope I carry forever.

I have to ‘fess up to some windscreen photos throughout the day. I could not begin to help myself.

I pulled over for this one:

We pulled over, got out, and made our way along the narrow track to get some pictures, and so Calli could roll in the snow some more.

There was a Japanese family whose children were playing in the snow. Few things break the language barrier better than a dog breaking up a snowball throwing contest by wallowing in the snow at their feet. Suddenly we were all friends, albeit confined to smiles and laughter.

I’ve always wanted to see Jackson Hole Wyoming.  And for a half-hour or so, I saw it. Now I’ve seen it. I don’t feel the need to go back. Adorablely rugged outdoorsy artsy whatevery shops.  Lots of people.  Well-heeled heaven, mostly.  It was impressive.  I could have spent a lot of money there, which, I assume, is the point.  I made Calli pose at a few junctures:

She didn’t bark at the Elk. I will admit to being   just a tad disappointed. Nor was she impressed by Big Antler Gate:

And took random photos to prove I had been there. But none of them seem really worth posting.

By now it was noonish, and I wanted to get moving to Grand Tetons Park.  I was unprepared.

I think it did me in.  Had to facetime Conor again (Jon you really need to have them put in cell service in Sequoia) to show him just how gorgeous it was. The mountains against the green.

Of course I thought about Horace’s Soracte Ode.  What would he have done with the Grand Tetons?

I pulled over less than I wanted to, more than you might have wished.  I did not photograph all the incredible sites.  And I didn’t go to see them all, either.  At the visitor’s center in Jackson Hole (no chapstick, Suzanne), the ranger suggested I see Jenny Lake.  I pulled into the visitor center at Jenny Lake and felt a little like the way I felt when Sean and I went to Toys R’ Us to find a stroller for as-yet-unborn Jon.  As those shelves were filled to the sky with kid junk that went on aisle after aisle, the visitor center lot was…well, just substitute RVs and cars and SUVs and wow.  The road was one way around the lake, one goes more north to catch it, and I thought, yeah, no, not THIS girl. This one didn’t sign up for Woodstock Wyoming.  See ya.

I spent a couple of hours driving though the Grand Tetons and then, I  was at Yellowstone. I get a huge kick  out of handing over my senior citizen pass.  But by now I was starting to get the first pallor of that feeling I get by the time I’ve adored my way through the first side of the Uffizi.  It always happens at the same Pontormo painting. The Madonna with the Long Neck (or, as I think of her in my more museum moments ‘giraffe girl’).  Maybe it’s reflex by now.  Here it was at the first ‘OMG that is gorgeous’ view of Yellowstone. Still happy, still excited, but just a wee bit of tired-eye, over-excited-wearing-off, wow there are really a lot of people here droop.

In retrospect there weren’t as many people as I had thought.  Or rather, there weren’t as many as there would be when I compared it to the masses at Old Faithful. Not that I wanted the geiser to myself (far from it–I read this morning that there have been dozens of earthquakes in Yellowstone in the past couple of weeks–I think I read hundreds, but I’ll underestimate for my own sanity).

There is a HUGE parking lot at Old Faithful, and a VisitorsCenter, an Inn and Yellowstone Shops.  I found a parking space by the Inn and went to the visitors center, where I waited on line for 10 minutes to pee.  And listened to the inane conversations of people in the rest room.  I had the privilege of listening to the woman in the next stall discuss the particulars of her day in marvelous hyperbole.  At least I save my hyperbole for here.

I asked about Calli and we could watch from a respectful distance, but all the other dogs were really unfriendly and Calli was dispondent: car-despondent and now dog-friend-despondent.  The people, however, were many and  excited: 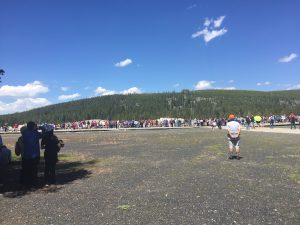 Old Faithul does his act for quite a while.

We didn’t stay to the end, but tried to leave the theatre before the end of the concert to beat the crowds. We almost did but I took a wrong turn.

I made the wonderful mistake of following my GPS, which took me, instead of through the northwestern part of the park, out the West Entrance.  This meant that last half hour or so of our time in Yellowstone was driving by rivers with people fishing, forested hillsides sloping down to truly babbling streams…just gorgeous. But I thought I was headed to the construction (half-hour wait max, they promised) so I didn’t stop. And then–I was out of the park on highway 191 headed toward Rainbow Ranch Lodge.  I could have turned around to see the NW part of the park but I was seriously done.

Out of the park, yes. Out of beauty overload, nope.  Back to the Uffizi. Remember when they put in all the extra galleries downstairs? I don’t remember when but I’ve been going to the Uffizi for over 40 years, so…but that extra gallery, with it’s incredible paintings, well, you can’t…it’s too much.  Ditto the modern art galleries at the end of the Vatican.  Pick one or two. But then it’s just too much. Well, highway 191 is just like that. Jaw-gaping spectacular.

I drove by the lodge and had to ask directions at a bbq place (no cell service, can’t call).  Checked in, got a zillion dog-instructions (Calli is costing me $40.00 extra), my key to Wolverine (a luxury room at the end of a small row of rooms), and opened the door to a room I could just live in indefinitely. Right on the River. It’s own little porch with chairs and a table.  Big. Fireplace. High-end toiletries. Jacuzzi tub (yes, I am definitely using that). Couch in front of the fireplace.  Rustic chic furnishings.

Calli getting her $40.oo worth

And a happy hour.  Half-price appetizers and drinks.  That’s where I type this. On the porch outside the bar while a wedding party (how perfect is that? from North Dakota and Montana) yuk it up inside. The wedding party includes a 5-year-old strawberry blonde pack of cuteness who loves Calliope.  Has been here three times to visit her and each time brings out other members of the wedding party to admire her.

So exhausted and depleted (in a happy kind of way) that I ate a hamburger topped with (? ham? taylor ham? bacon? ). Proof.

So much for the veggi-holic.  Some days call for drastic measures. I almost got the bison, but feared it would come off as revenge.

Ok. Off to walk the dog.  Tomorrow: rush back to the beat the hoards at Yellowstone or just stay here and go to Cody? Hmmm….

3 thoughts on “Museum-itis in God’s Wonderland”