There is not much in Elko Nevada.  My hotel was fairly worn and tired, but it had the key amenities (microwave, fridge with a freezer, places to walk the dog) plus a surprise: a comfortable window bench.  So I was happy.   And not unhappy to be out of there. I would have been itching had I known what a great day I was in for.  Better to be surprised.

The Nevada I drove through  was a series   of plains bordered by elevations ranging from hills to snow-capped mountains:

Both Flat and grand, all in view at once:

The gas station above was the start of the “I love this” part of the day.  I had turned off 80 onto 93, a two-lane road that cuts through ranch after ranch.

The road was long, straight, beautiful. It probably would be boring if I had driven it many times, but I hadn’t and it wasn’t.  It developed character in the form of great heaps of rock.  Had I been able to stop the car to take a photo of the cows wandering on hillsides grown golden dotted with rock outcroppings, I would have.  There were a lot of spontaneous “oh, wow” cries from the front seat (and a lot of “are we there yet” sighs from the back).

Settled in the midst of even bigger rocks was a great little rest area by Salmon Creek: 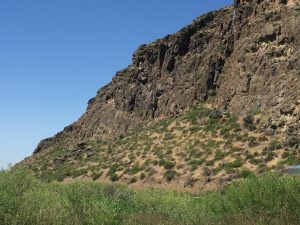 Ok. It wasn’t much, really.  A small parking lot with huge outcroppings on one side perpendicular to Salmon Creek, into which Calli immediately waded, an outhouse type restroom, and a bunch of dogs for Calli to say hi to.  I talked to two sets of people who always stop there.  I would too.  Primitive but still inviting.  And HOT.  It was ridiculously hot and it’s going to stay hot so I won’t talk about it.

After 93, my gps told me to get off and take a bunch of  secondary (really secondary) roads that didn’t even have names (“turn right on 3500 E”; “turn left on 2700 N”).  These roads took me along side of horse and cattle ranches and farms and it was GREAT.

Calli thought it was great too. I thought she would expire from barking.  These roads were so secondary I kept hoping that Google Maps didn’t have a sick sense of humor.  Eventually, however, we turned onto a main road, and then a highway that took us into Idaho. If nothing else had happened along the drive, I would have been happy. But the fun was just beginning.

I got off 86 at a rest stop on top of a rise.  Clean and well maintained.  A sign pointed to a “historical marker” so Calli and I headed that way.  The marker was for a place where the wheel ruts for the Oregon Trail were still visible.

While I was reading the sign at the head of a path that led down to an enclosure, a truck pulled up and the couple inside asked how far in was the trail.  I’ve been in Idaho all of a hour or so.  We walked down the trail chatting, and indeed you could see wheel marks. The man of the couple showed me a photo from Oregon where wheel marks are visible worn into rocks.  In the information hut was a reference to Massacre Rock.  The guy said they were going to Massacre Rock Park.  “Whose massacre?” I asked, and received a look plainly suggesting that I need to read a history book (which I probably do). “The Clark family. We are Clarks. They were our ancestors.”  Whew. I don’t feel bad not knowing what happened to great-granddad.  I googled Massacre Rock Park, and dogs are allowed. Next stop Massacre Rock Park, where the entrance fee is on the honor system: you take an envelope, put $5.00 in and fill out your car info, tearing off a flap and putting it on the dashboard:

The people at the visitor center were lovely, but they expressed surprise at the Clark family being a part of the massacre.  They rattled off the list of names of families who were killed as they moved west, and showed me the the handwritten diary of a woman whose name I will never recall. Her diary described the  landscape on the hard road west.

We drove down to the river and hiked around, helped a bit by a couple who were camping and knew the park well.  It was gorgeous beyond imagining, better (much) than the many photos which follow:

I had to FaceTime Conor to share the beauty.  It was wonderful. It made me so happy. Calli was happy on the bluff and in the river. Otherwise she was just hot.

We drove to Register Rock, a large rock behind gating on which settlers had inscribed their names and the dates (of course, you can’t see anything behind the bars)

I had every intention of researching the rock and the event that led to the name massacre rock, but I can barely keep my eyes open. So it’s beautiful photos and no history.

Then off to Idaho Falls, where I am staying at an older convention hotel right on the river.  My room is huge, but, unfortunately, not on the side that faces the Snake River.  Calli and I went for a walk along the river:

Just as I was wondering where the Falls are, we came upon them:

There is nothing really protecting people from the falls if they want to be dumb about it. You can climb right down to the river’s edge. We did not, much to Calli’s disappointment. But I did document her presence there:

We stuck to the riverwalk, where there are beautiful flowers:

And a friendly rattlesnake

On the way back to the hotel, Calli took her second dip in the Snake River, but in Idaho Falls, the river by the banks left her really really filthy. Srubbing with shampoo filthy:

One thought on “I’m moving to Idaho”