You’ll have to wait to find out why.

I’m in Little Rock. How could I NOT go to McArthur Park (even if it’s the wrong McArthur park, song-wise). McArthur Bark Park. Saturday morning. No one there. Oh well.  Cool rock benches, however:

We moved on to the river and found a spot on the street in the River Market:

Parked, we headed toward the river. But because it’s the River Festival, which I thought might be cool, the whole river district was closed…well, except to sweet, fast-talking little old ladies with a cute dog. Took awhile but they let me into the still closed festival area.  The guys building one of the stages happened by while I was talking to security, and they had just built a stage in Charlotte, and we got talking and next thing I know I’m getting behind the barriers to walk over the pedestrian bridge: 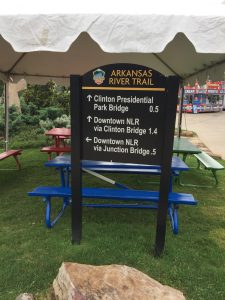 Calli was less than impressed:

We then headed back toward the Presidential Bridge over to Clinton’s library. But even that side of the river was bustling-with a bike race.  I met some really lovely people who told me not to go to Fort Smith but to go to Petit Jean instead, where there was great  hiking–about an hour out of Little Rock. When people hear what I am doing they are pretty speechless.  It’s like telling them I’m a Classical Philologist.  The look I get is different, but still puzzled.

Clearly, someone collecting so many photos of a dog traveling companion will jump at the chance to help others with photos. I offered to take a group shot of a family in front of the Clinton Library (where there is currently an X-treme bug exhibit), to allow the mom taking the photo to get actually in the photo. While concentrating on the camera, Calli decided to befriend the bug in the pool out front:

I did get her to pose in front of the library itself.  And, of course, with the other bugs:

By that time it was 10:30 so I walked back to my car and left. I was going to go hiking in Petit Jean, I really was.  But a wiser voice told me that I should get some distance behind me so as not to have a day like yesterday, when I was tired before the drive. It started raining not so long after the exit that I would have taken for the hike, and I thought “well, at least it’s not torrential.” So of course, it became torrential. So torrential I tried to pull off onto an exit…but could not see the road. Followed slowly the truck in front of me and pulled off, going off the shoulder only slightly.  More cars followed and soon there were quite a few (20?) cars on the ramp pulled over to the side.  I should have taken a photo through the windshield.  It was astonishing. Later, at a rest area, I got talking to a guy who was probably on the same ramp.  He said his car had started to hydroplane.  Bless my Subaru.  40 West was ok after it let up, but 40 East a different story, with an accident that I can’t imagine the driver walked away from and a huge backup.  I hope the driver made it.

With the rain and Google Maps changing its mind (never happened to me before: ‘get off in a mile, get off at this exit, get off, go left, go straight, take a u-turn, get back on highway and go another few exits’), it was 5 before I got to today’s La Quinta.  It’s great but the fridge doesn’t have a freezer for my ice pack.  Checked Bring Fido and got in the car AGAIN to take Calli to a dog park, that turned out to be an enclosure behind a gas station. Sigh:

At least she likes the room: